This is a restoration of an earlier post. The first paragraph and first photo are new.

Damien was up for Thanksgiving and we had our usual fine time with lots of conversation ranging from shop-talk to the Simpson’s and much comparing of Australian culture to American(good for more than a few laughs). He brought along a case -full of marvelous tools he had made for an antique pistol set(see ball-mold below). It’s extremely difficult to appreciate the time and attention to detail involved in making a set of tools such as these. In the ball-mold for example note the pleasing curve and taper of the handle and thumb lever, as well as the generally pleasing proportions and finishing touches.

In any field there comes along a practitioner every decade or three who stands out. Someone who’s inborn talent cannot be denied but who has achieved a level of accomplishment because of passion, hard work and sacrifice. Their work exhibits mastery of certain standards in the field but also a flair for innovation and imagination.

In the spring of 2012 I had the pleasure to meet Damien Connolly who fits the above. We had met online a year or so earlier on Sam Alfano’s engraving forum. By-the-way Sam is another engraving master, a term that I do not use lightly. Damien had mentioned he was moving to Vermont from Australia and I suggested he get in touch when the dust settled.

He did get in touch and I’d say we hit it off which is not always a given in the small realm which we inhabit. Damien will be embarrassed if I litanize his mastery of many diverse skills, so I will largely let the photos below do the talking. I should mention that far from being a master of engraving, he is capable of making a gun from scratch as has been done on the miniature shown(name) which is fully functional. This includes the wood stock-making and attendant carving. I have not seen anything like the carving on the Colt grip.

Damien has settled a few minutes from his friend, master engraver Winston Churchill who was very helpful in facilitating the move from Australia. It would be hard to imagine a better advocate than Winston in making such a daunting move. He is a legend in the engraving world, recognized as the premier American firearms engraver for more than four decades. Winston was very inspirational to me in my early engraving years in the 70s, and I was very happy to be invited down to visit Damien and Winston, who I haven’t seen in a number of years. We had a splendid time sharing work, talking shop and swapping lies.

Also I should point out that often mastery of the technical does not necessarily mean there will be a corresponding sensitivity to forms in the natural world. In Damien’s case, however this seems to be abundantly part of the package as seen in the Water-Buffalo and the drawn design of a fox and kits. We may have to kill him!! 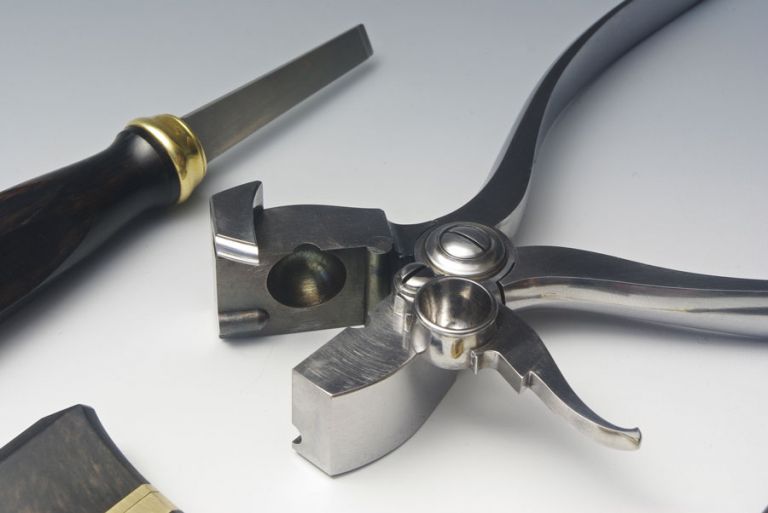 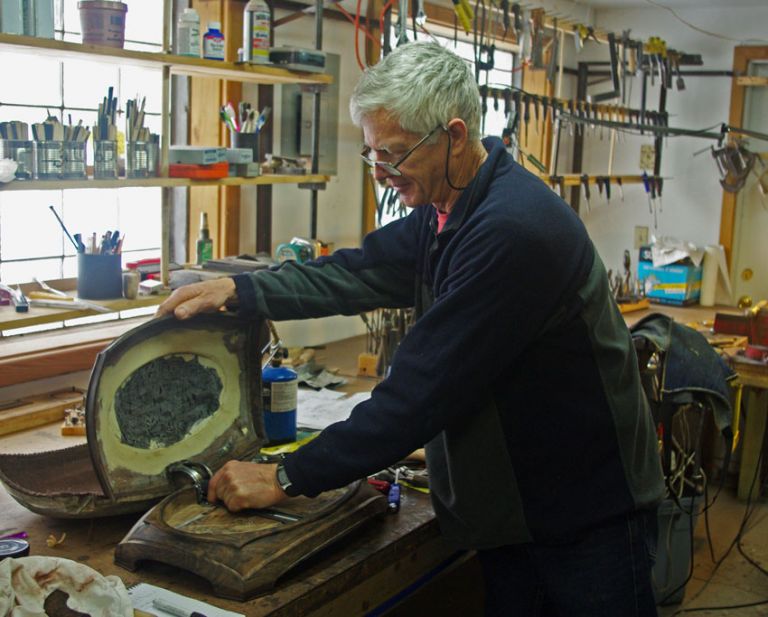 Miniature made entirely by Damien 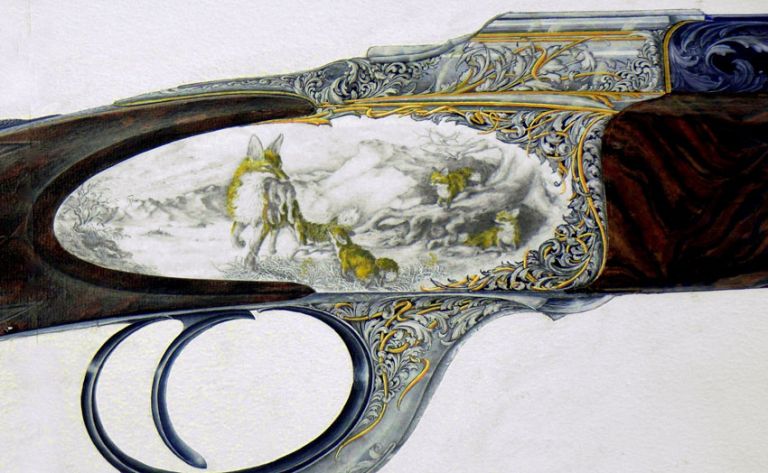 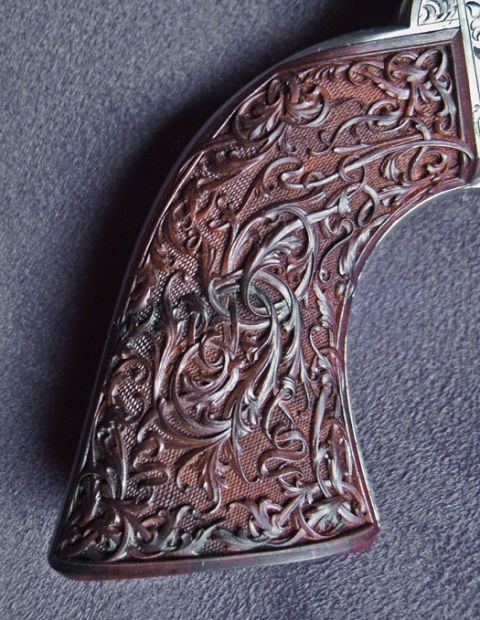 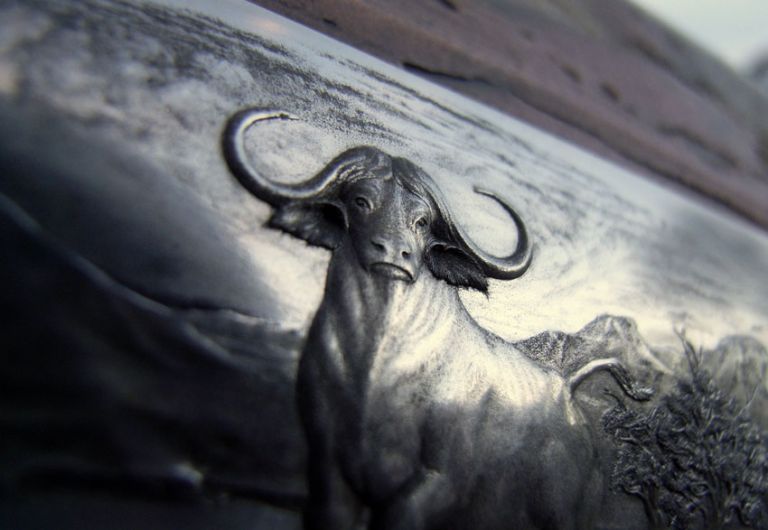 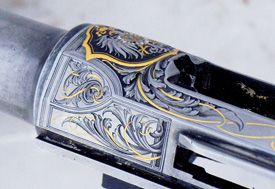 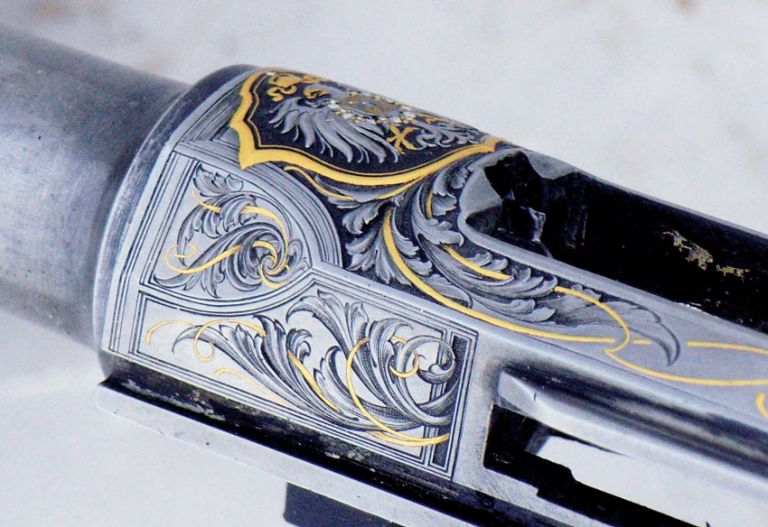 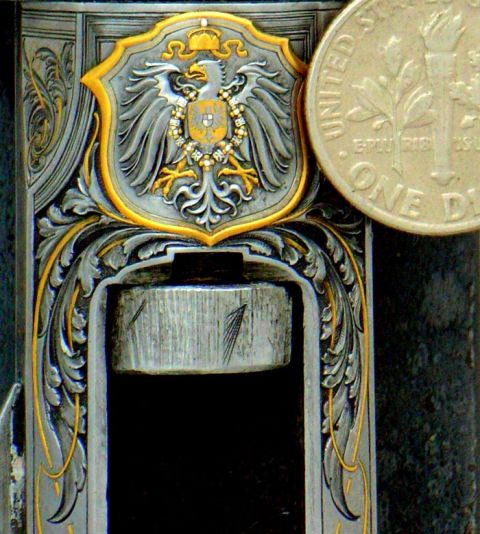 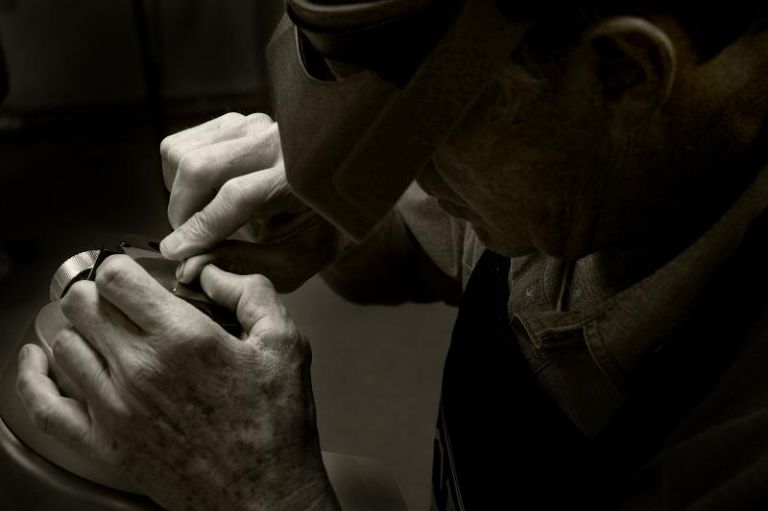