As I approach the Fitch-Robert sugar-house, steam rolling out the vents; earth, wood, water, fire, metal and humans are working in concert and I hear gentle conversation coming from within. I bid greetings to Judy and Bernard and am glad for a warm welcome from them and the arch (fire-box) on a crisp sunny day. Sugaring demands steady concentration, and at times quick action, so I try to stay out of the way, as they watch carefully, making fine-tuning adjustments as the refinement from sap to syrup evolves. Bernard and Judy’s sense of humor is infectious and we talk and joke, always with half an eyeball on the pans, and frequent checks of the specific gravity. 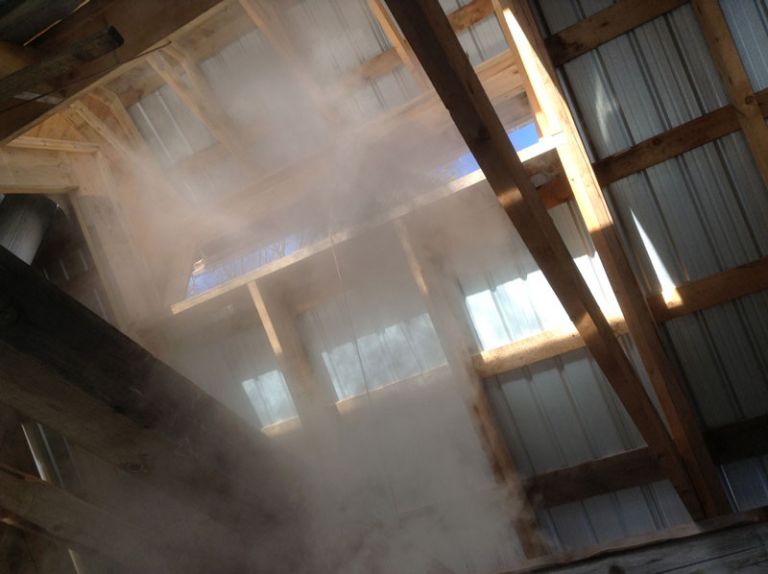 Later, in a less demanding moment, we sit while the arch murmurs peacefully with a constant exhalation of steam, punctuated by engaging or comic stories from Stan. 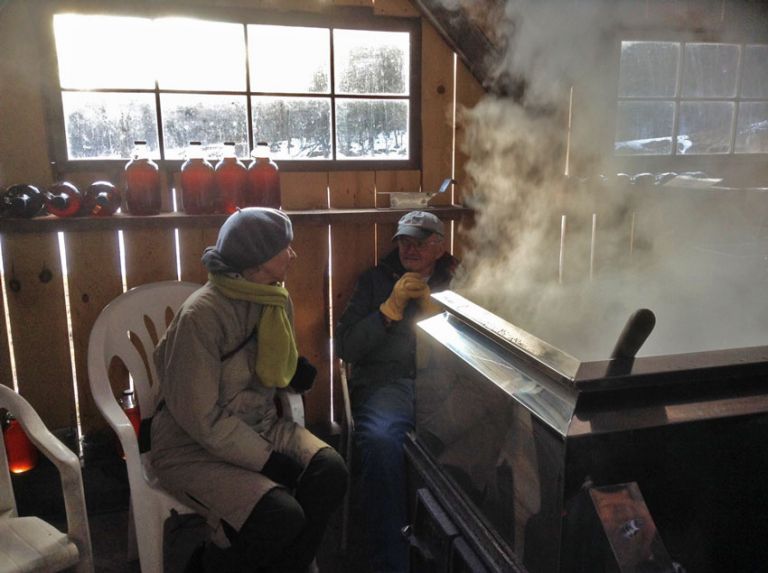 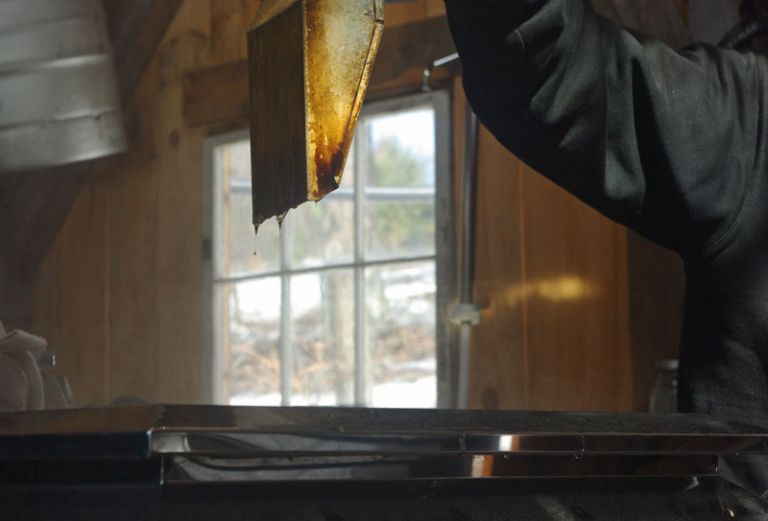 Sheeting is an indicator of syrup 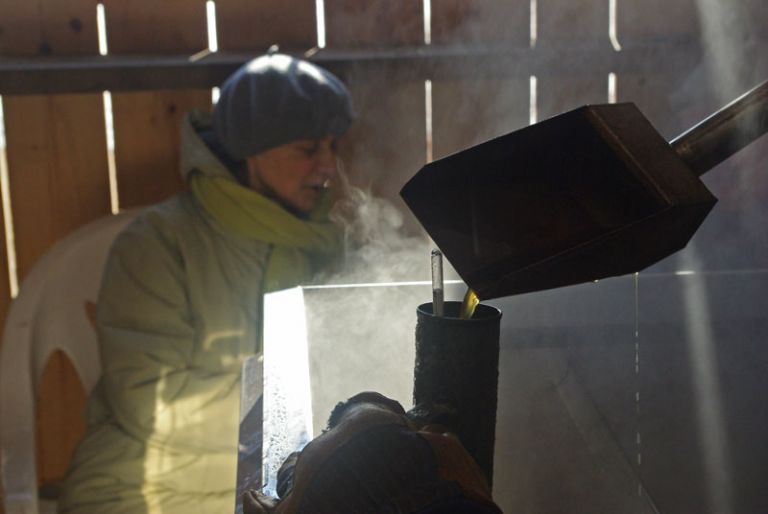 Specific Gravity is another 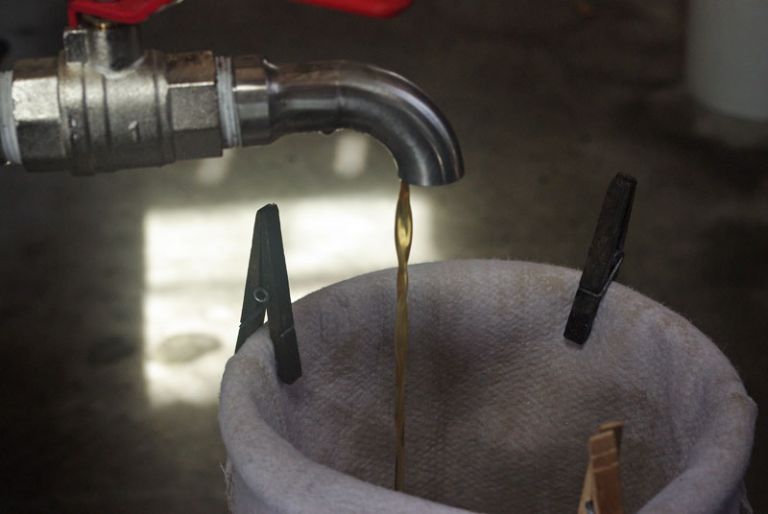 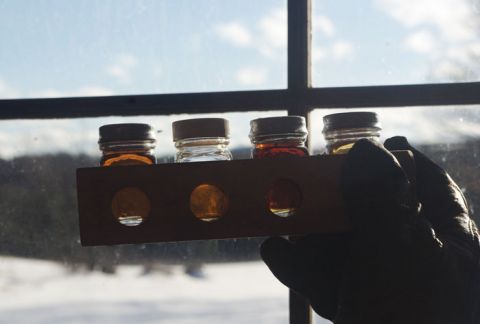 The local sap gathering ended about a week ago for the Fitches, as temperatures reluctantly refused to go below freezing, shutting off the sap flow, at least for bucket collecting practicality. Alternating freezing nights with above freezing days is a key element to sap flow. It was a short season, getting a late start, as winter hung on by its frosty claws. The sugar season endures for a year in the gallons of ambery bliss stored in our cellar and tippled out until next March. 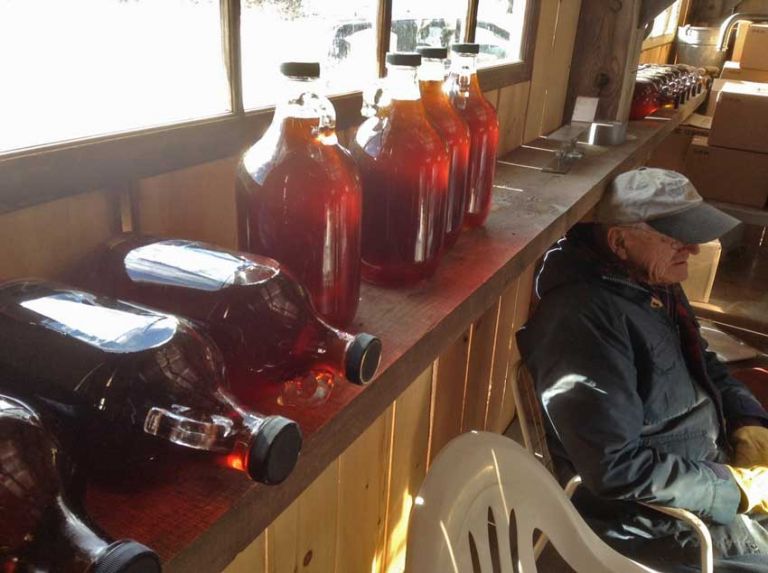 There are a few hold-outs, in our locale, to the old-timey bucket and gather method of collecting the sap, with straightforward boiling hardware. The Fitches have have done this going back to 1907. 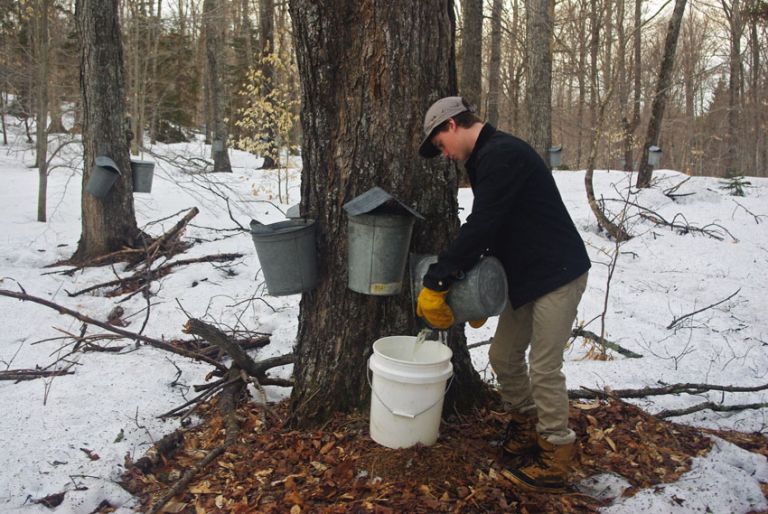 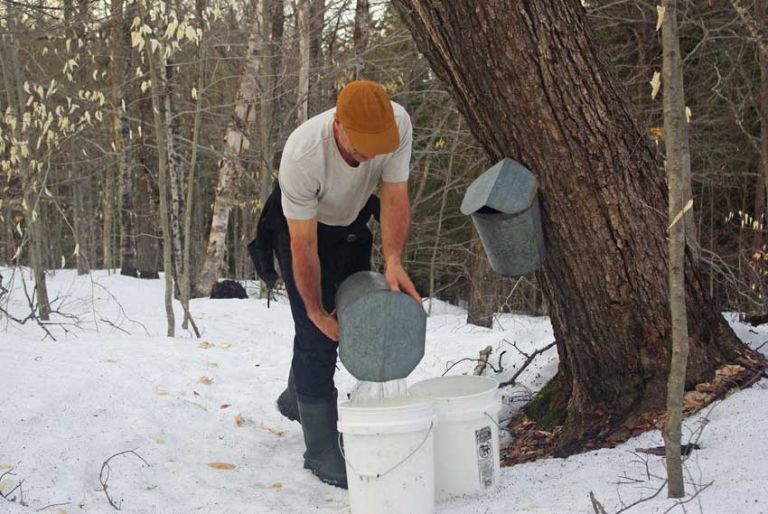 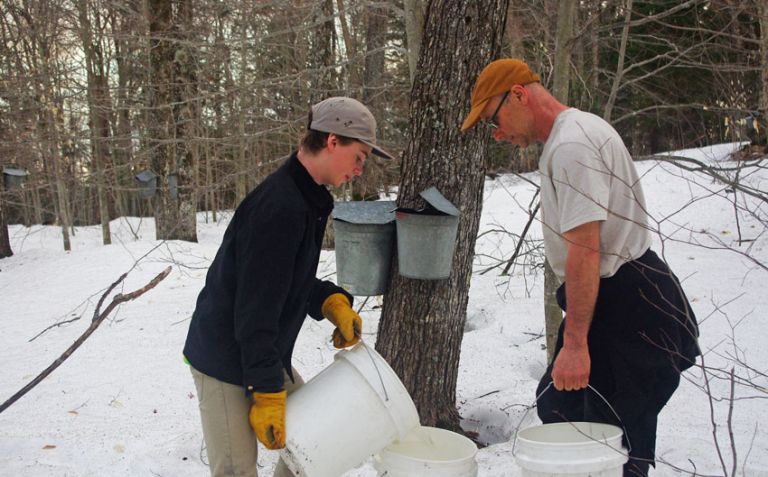 Teamwork with Liam and Bernard 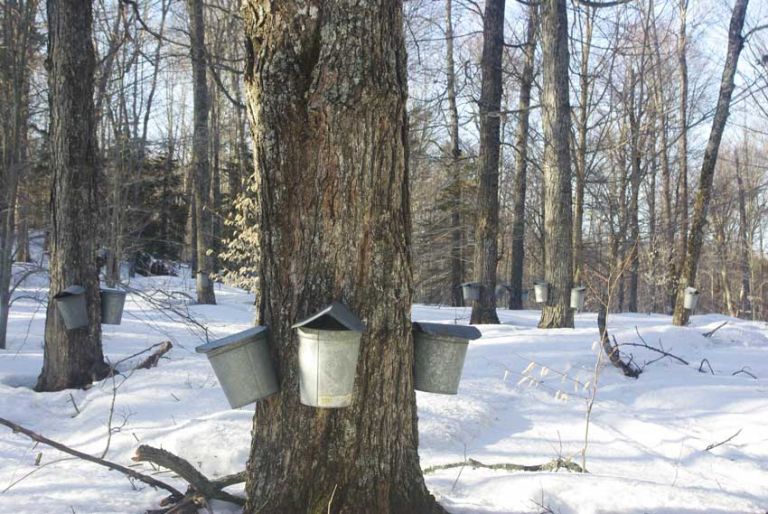 I happened to chance by one day when wood was being moved into the sugar house. A line of family and friends formed and Renée, Liam and Luca found that moving smallish chunks through the air added a flair of excitement to the rhythm. 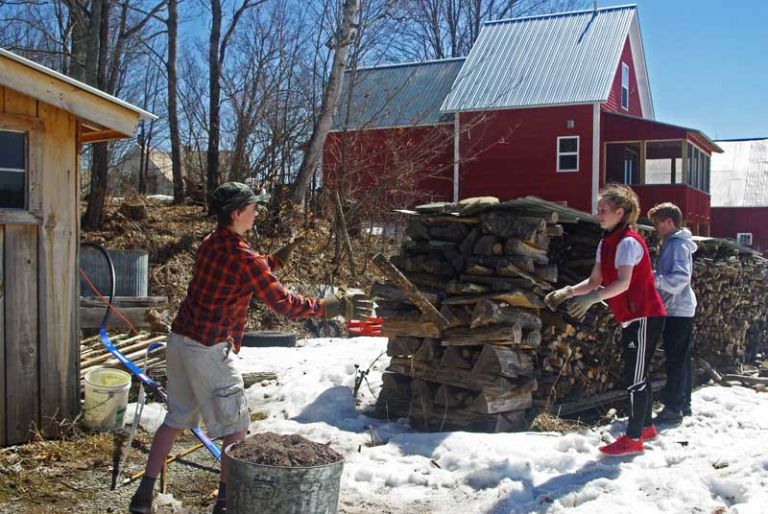 Can you spot the two sticks in mid-air?

The modern Maple way involves kilometers of unsightly tubing, reverse-osmosis gizmos, vacuum equipage and all manner of hands-off efficiencies. Far be it from me to critique any sugarers’ means of livelihood in these lean times but for shear earthy pleasure (at least from this dilettante’s perspective) I’ll take the home-spun way that has served the Fitch-Robert family for a century.

Which would you prefer? 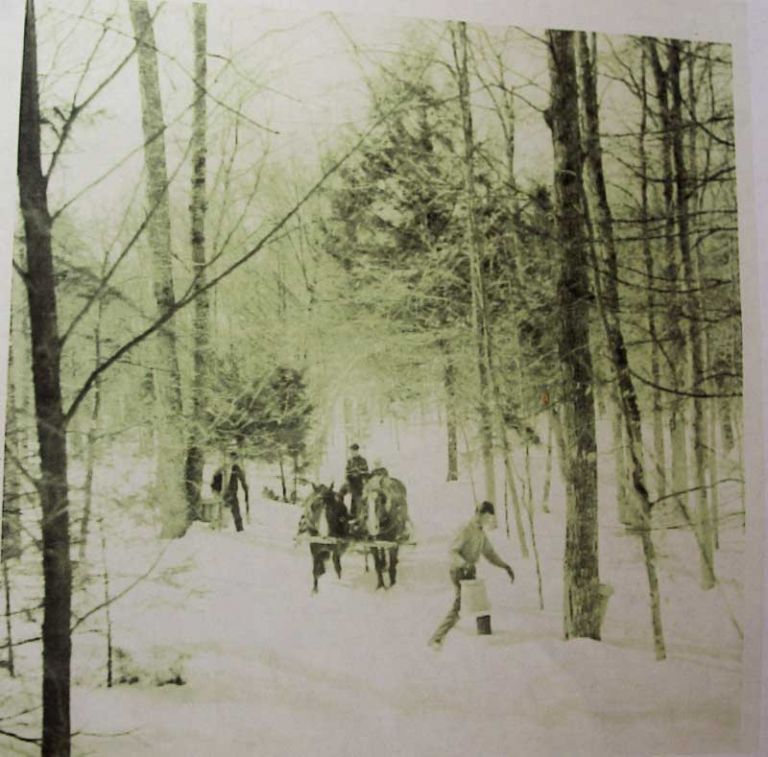 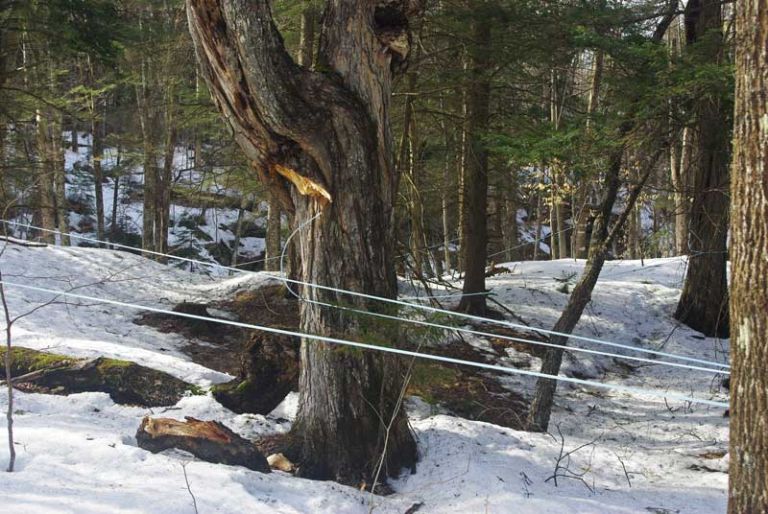 « These Days Will Come….
EarthWalk in Balance »